Hutsul musical instruments – the ancient voices of the Carpathians

The Hutsul area is one of the regions of Ukraine, where the ancient traditions and folk crafts have been wonderfully preserved until today. Highlanders’ musical art remains one of the most interesting and fascinating aspects of local life. Today we’ll tell you about the original folk instruments, which you can see and even listen to during a trip to the Carpathians! 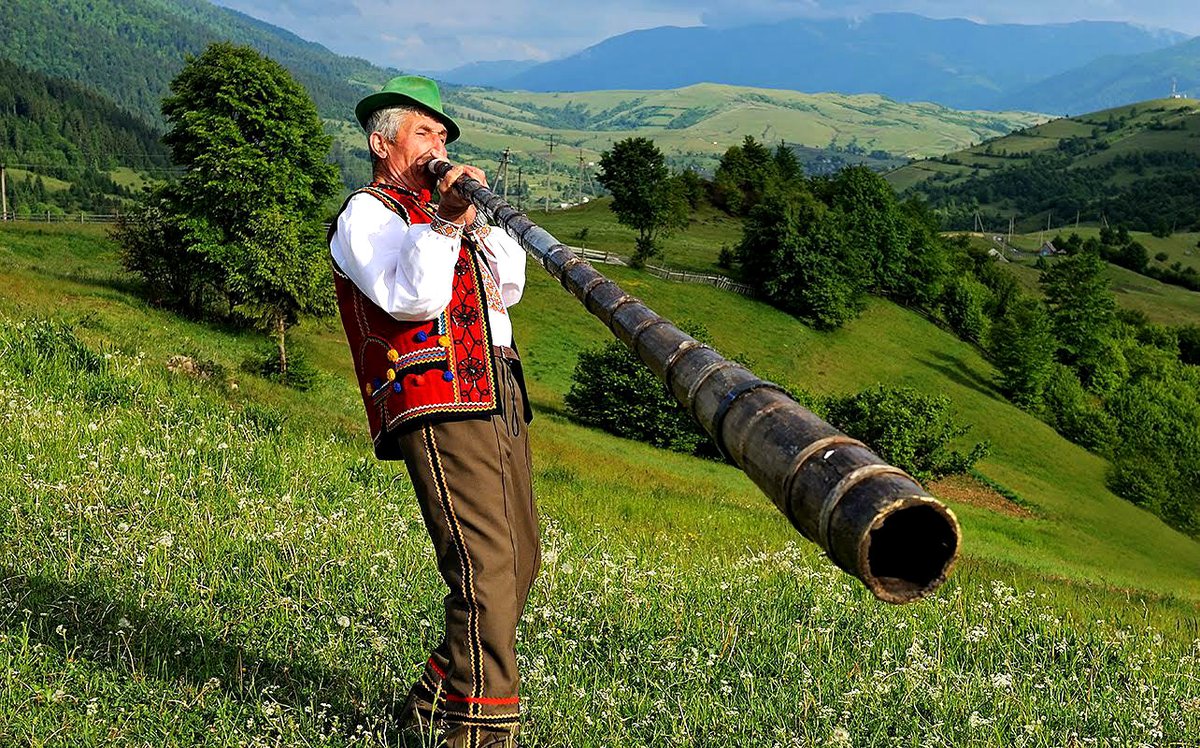 The trembita is perhaps the most famous Hutsul woodwind musical instrument, which is also recognized as the longest in the world. It looks like a thin tube, slightly widening towards the end. Despite its impressive size (up to 8.5 m), the instrument is very light. It produces a strong and long, rather high sound, audible at a distance of up to 10 km. Since ancient times, the trembita has participated in all important events of Hutsul life: birth and death, weddings, herding cattle to pastures, etc. Therefore, its manufacture is associated with numerous traditions and beliefs.

For example, only a Thunderbird Spruce (a tree struck by lightning), which is up to 120-160 years old, is suitable for making trembitas. It must dry for a year under the Carpathian winds and sun, after that the trunk must be cut in half with one blow. The process of making trembitas is long, and there are very few real masters of this craft. You can listen to the instrument in a museum or at one of the region’s ethnic festivals.

Duda is the Ukrainian version of bagpipes. It is made of dressed calf or goat skin. A playing pipe and several squeakers are inserted into the fur. Due to the rather large volume of air the musician does not have to blow continuously into the reservoir, he gets the opportunity to sing along to himself. This Hutsul instrument was once very popular among shepherds. It was also played in the orchestra of Zaporozhian troops. Ukrainian national bagpipes were usually decorated with an elaborately carved goat’s head, rattles, and bright tassels.

These national instruments have been common throughout Ukraine since the 16th century, but in the Carpathians they have been popular the longest. Kobza and bandura are similar to each other and resemble ancient lutes. But these instruments still have significant differences. Kobza is considered a simpler instrument, a true folk one, with 20-25 strings. Bandura is a more complex and expensive instrument (65 and more strings), which was more often found in rich houses.

Cymbals are a flat musical instrument, which gives a melodious sound when tapping the strings with special sticks or plucking. In Ukraine it has been known since the 17th century. Most often the sound of the instrument was used as an accompaniment for dances and songs or as a part of the first ensembles – “trio music”. These small groups usually performed at christenings, weddings, folk festivals and other ceremonies. Even today you can hear the cymbals at major Hutsul festivals and celebrations. The unusually gentle sound of the strings gives the melody a special charm. 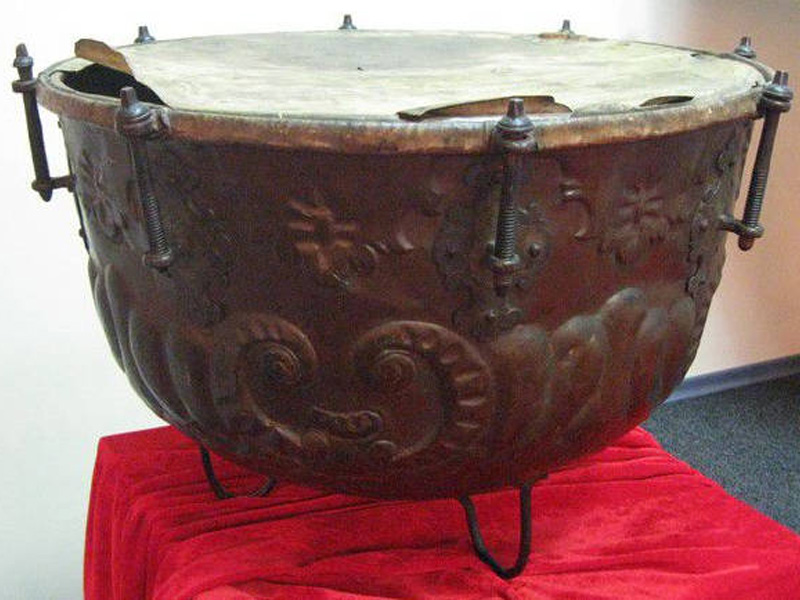 A tulumbas is a percussion instrument, the body of which resembles a large cauldron, and the top is covered with a tightly stretched leather or dense cloth. A pair of such drums is already called kettledrums. For a long time, kettledrums were used not only for the beauty of musical melodies. Zaporozhian сossacks used them to communicate (especially during battle) and intimidate the enemy. The largest tulumbas was installed in the Sich – it could be beaten by 8 people at a time. In Hutsul tradition, such drums were more often used “for peaceful purposes”, and their muffled sound gave the music a special solemnity.

It is a very unusual musical instrument of Hutsul, which looks like an elongated barrel, the top of which is covered with leather. In the center of this covering a bundle of horsehair is fixed. The musician pulls sharply, but not too sharply, on this improvised tail, obtaining unusual short sounds. The bugai is said to imitate the roar of a bull, but to the modern listener it would rather seem like a puffing of a trumpet. The pitch of the sound depends on which part of the “tail” the musician’s hand is on. The process of playing looks like a lot of fun.

There is a colorful musical instrument with a low and slightly muffled sound. It was invented by Ukrainian villagers when the invited musicians had already left and the guests demanded “continuation of the banquet”. They put a beam in an empty bucket and joined the two elements with a few strings of wire. The sound was extracted with an improvised bow, which was an ordinary stick.

Over time, the instrument was modified: a drum was used as a resonator, and a carved goat’s head adorned the neater neck. A metal cymbal was often attached to the head, so that its sound tinged with the bass voice of the kozobas. This Hutsul musical instrument quickly became popular among folk musicians and even professional bands.

This compact instrument is one of the oldest on the territory of Ukraine. Archaeologists have found such products even during the excavations of the Neolithic period. Originally vargan was made of animal bones, but in Ukraine has stuck exactly to the metal version. The instrument can have different tones, but sounds only in the presence of a resonator – usually it is the mouth and nasal cavity of the musician.

Playing the drymba is similar to meditation, that is why such items have long been considered an essential attribute of molfars (sorcerers and healers). Many believe that the vibrations that the instrument transmits to the human body while playing have a therapeutic effect.

Despite its name, the hooter is a string instrument, which was placed vertically on the lap to play or pressed to the chest like a violin. The hollow pear-shaped body was made of wood with only three strings strung on top. The instrument was made in four sizes. To play it they used an arched bow. The result is a warm pleasant sound. Very few original vintage pieces have survived, as in the 17th century by decree of the patriarch a hunt was declared on “demonic instruments” – they were ruthlessly destroyed. Later the hooter was replaced by a more complex product – the violin. Today you can see the original and reconstructed hooters only in museums.

This instrument has come to Ukraine from Europe, where the wheel lyre used to be played in the courts of the rulers. It is a sort of hybrid of a violin and an organ-grinder: the sound is produced due to the fact that a special wheel, rotated manually, clings to the strings. At the same time, the musician can grip the frets and pluck the strings with his fingers. The instrument produces two sounds: a continuous hum and melody. In Ukraine, since the 17th century, the wheel lyre was a frequent companion of kobza, although it did not have such a social significance. Musicians treated the strings with wax to soften the sound of the instrument. However, the limited methods of playing and technical imperfections prevented the wheel lyre from staying among the popular folk instruments of Ukraine for a long time.

Where to see Hutsul folk instruments?

Folk instruments are still preserved in many Hutsul families. To admire the best examples, listen to the virtuoso melodies, it is better to visit specialized museums. Today two private collections are open to the public. The first one is in the Museum of Hutsul Life, Ethnography and Musical Instruments named after Roman Kumlyk, and the second one is in the museum “At Trembitar”. Both exhibitions are located in Verkhovyna. If you intend to visit one or both exhibitions, you should confirm the time of your visit by phone in advance. The cost of admission to both museums is symbolic.

Here you can not only see Hutsul musical instruments, but also listen to the melodies in live performance. You can touch and even try to play some elements of the exposition under the guidance of a guide. Another large exhibition, but in Transcarpathia, is opened in the premises of Uzhgorod Castle. It can become a part of a large tour of this monument of history and architecture.