The most beautiful castles of Ukraine: top 10 ancient fortifications

Fortresses of Ukraine are fortifications of different centuries that were mainly built for defensive purposes. Some fortifications were constructed to protect the land from enemy troops, while others were erected by invaders. That is why Ukrainian fortresses are so diverse in architecture, but invariably majestic and have a rich history.

Picturesque forts are scattered all over the country and can be found in every region. But today we are going to look at TOP-10 castles of Ukraine that have been preserved in the best condition, remain the most popular among tourists. 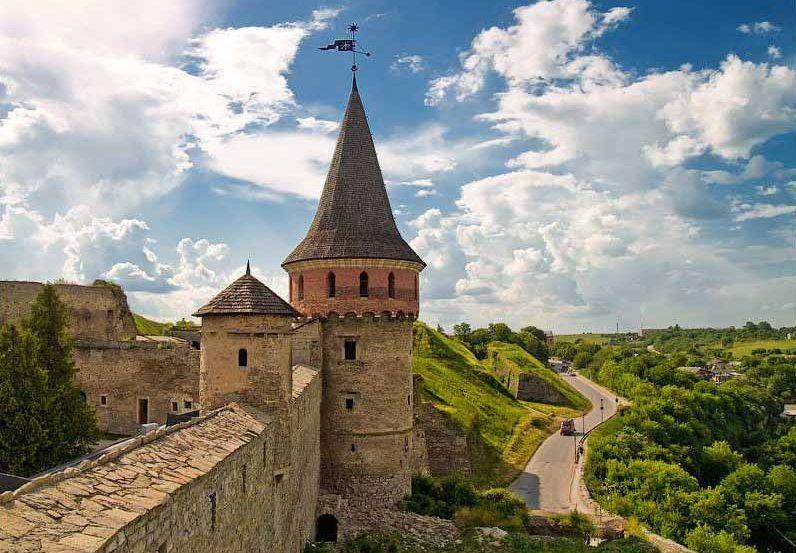 This is a large picturesque fortress located in the city of the same name in the Khmelnytskyi Region. According to some historical data, fortifications existed in this place in the period of Kievan Rus’, but officially the castle was built in the second half of the 14th century by Lithuanian princes of the Karijotaičiai family. In the 15th century, the fortifications came under the ownership of Poland, and later – of the Polish–Lithuanian Commonwealth. Local fortress walls helped to repel Turkish and Tatar raids aimed at seizing European territories more than once.

In the 16th century, the sparse wooden elements of the castle were replaced by stone ones, and monumental fortifications acquired a modern look. The fortress changed owners at various times, but it retained its military significance until the 19th century. In 1937, the Kamianets-Podilskyi castle was declared a museum preserve.

Today the fortress is included in the list of the main historical and architectural monuments of Ukraine. Everyone is offered sight-seeing tours here. Since 1998 the City Day and the International Balloon Festival are celebrated every third weekend of May.

This majestic Renaissance fort is located in the Khmelnytskyi Region in the village of Medzhybizh just 30 km from the city of Khmelnytskyi. Military fortifications were built on this site several times since the XI century but they were all destroyed by the Mongols. The real castle was built by Lithuanians in the second half of the 14th century, and in 1540 hetman Mikołaj Sieniawski significantly reconstructed the fortifications – this is how we know the fortress today.

Like other castles in Ukraine, the Medzhybizh passed through many hands over time, and its history is filled with romantic and heroic legends. It is noteworthy that the building has not lost its importance even in the 20th century: in 1917, Pavlo Skoropadskyi organized here a Ukrainian garrison corps that successfully repelled the Bolsheviks’ offensive the same year. Later, until the Second World War, the fortress housed an oil factory, and only in the 1960s, the castle restoration started.

Since 2004, the Ancient Medjibozh Festival has been held. The visitors can see the archery competition, real knights’ fights, and minstrel contests. It’s an exciting costume show! In addition, there is a museum of local history in the premises of the castle.

The castle is located at Khotyn in the Chernivtsi region. The tribes of the Tivertsi began to build fortifications on this site in the 5th century. A stone fort appeared on the southern bank of the Dniester in the 13th century, thanks to Prince Daniel of Galicia. When in the 15th century Moldavia took possession of the fortress, the territory of the castle was expanded three times. Since the 17th century, the fortress changed owners more than once. It is interesting that at the dawn of the 18th century, the Turks even hired French military engineers to build an external defensive line.

Today Khotyn fortress is in an excellent restored state. The castle has become a real movie star: such movies as The Rising Hawk, Taras Bulba, The Knight’s Castle, The Arrows of Robin Hood, and many others were shot within its walls. Today there is a torture museum here, and local guides provide fascinating tours around the entire area. Fans of historical reenactments love the fort recreating equestrian battles, sieges from different years, and other military maneuvers.

The Lubart’s fortress is located in Lutsk (Volyn Region). You can see a picture of the fort on the back of the 200 hryvnia banknote. It is not known exactly when the fortress was built, but the first information about the wooden defensive constructions dates back to the 11th century. The stone runs were built here only in the 14th century under the Lithuanian Duke Lubart. Fortifications were built, rebuilt, and improved over the course of four centuries making the local walls virtually impregnable.

Once upon a time, the structure consisted of the Lower and Upper Castles. Only the central citadel, located higher on the hill, has survived in good condition. As t the Lower Castle, there are a few fragments of the wall and tower only that can be seen today. Tourists can book a tour around the entire fort and even go down into the ancient dungeon. In the premises of the fortress, there are four museums: weapons, book printing, painting, and bells.

One of the most compact and at the same time well-maintained castles. It is located near the village of Olesko (Lviv Region). It is one of the oldest historical monuments in Galicia. The first documentary records about this castle date back to the 14th century. Like other castles of the region, the Olesko Fortress was repeatedly besieged and captured by the enemy, sold, destroyed, and rebuilt. In the 19th century, the fortress fell into disarray and was abandoned. Full recovery became possible only in the 1960s.

Nowadays the Lviv Art Gallery is situated in the buildings of the fortress. The exposition presents artistic paintings and icons of the 13-19th centuries. Also, there is the largest in Ukraine collection of wooden sculptures inside the buildings and in the garden. Don’t miss a walk around the luxurious park laid out around the citadel: it is beautiful here under any weather conditions.

This medieval fort is located in the town of Mukachevo in the Zakarpattia Region. When exactly the fortress was built is still unknown, but the first references to it date back to the 11th century. The castle was named after the military fortification of the same name made of oak stakes. The local citadel was once surrounded by such paling. At different times the castle was owned by Lithuanian, Hungarian, Transylvanian princes, and even the Habsburg dynasty.

The Palanok Castle is one of the top five European strongholds that have never surrendered to the assaulting troops. The structure was built on a high hill. It consists of three tiers that vary in style. The observation decks of the Upper Castle enable visitors to see a stunning panorama of the surrounding area. Today the walls of the fortress host painting and history museums, as well we souvenir stores. Everyone can take a photo in an old costume. 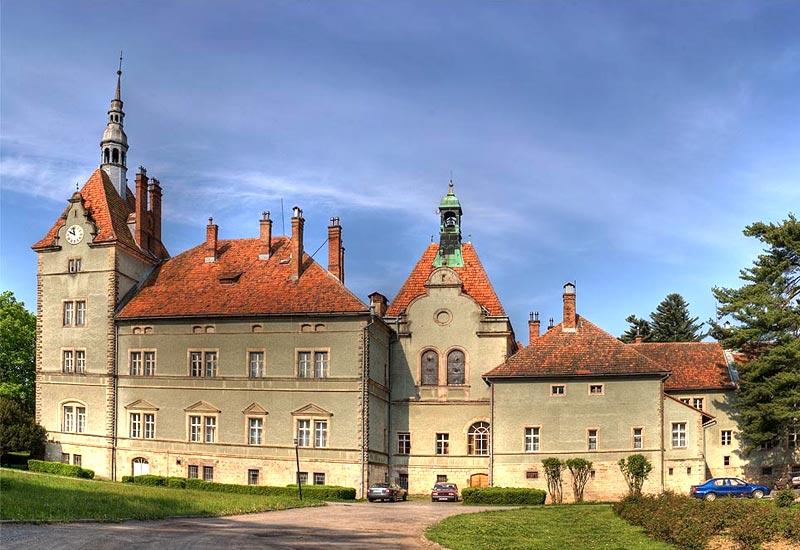 Today most of the rooms are occupied by the sanatorium, but there are sight-seeing tours to the fireplace room and the library organized for tourists. In addition, visitors can enjoy unlimited walks around the territory of the Shenborn residence. One of the most memorable sights of the castle park is an artificial reservoir – its design repeats the outlines of the Austro-Hungarian Empire on the map.

The fort is located in the center of Uzhhorod in the Zakarpattia Region. According to various historical sources, these fortifications were established by the Hungarian magnates in the 7th or 9th century. Taking into account such an ancient origin, the castle has survived in a wonderful condition. At different times the citadel was overtaken by the Poles and the Austrians. After the fundamental reconstruction and reinforcement performed by the Italian engineers, the Uzhhorod Castle had never been taken by storm. The fort was surrounded by a deep graff from all sides, and the walls were up to 3 meters thick.

In the 18th century, the castle lost its military purpose, and a seminary was hosted within its walls. Today, there are a lot of interesting tours, including the descent into the torture dungeons. Also, visitors can attend the Zakarpattya Museum of Regional History and a restaurant where they can taste local wines. Since the citadel was privately owned most of the time, it was always accompanied by fascinating under-the-carpet battles, romantic and downright creepy legends. It is a must-see for travelers who want to immerse themselves in the atmosphere of the Middle Ages and touch a living piece of history.

Fortifications are located in the town of Dubno in the Rivne Region. The castle was founded in the 15th century by Prince Konstantin Ostrogski, but the fortress got its modern Renaissance appearance in the 17th century only after reconstruction by the heir of the founder. The castle was owned by Volyn and Polish princes at different times, but the fortress was never taken by storm. During its existence, the walls of the castle successfully repelled numerous attacks of Russians, Swedes, and Tatars.

The fortification is surrounded by the Ikva River with its banks full of indentions and many kilometers of creeks. Interestingly enough, the Dubno Fort remains the only Ukrainian castle that was built according to the two-bastion scheme. A beautiful description of the structure can be found in Taras Bulba, a novel by Gogol. Today part of its premises is used for museum exhibitions. Scheduled and theatricalized tours are held on a regular basis. If you want to take part in a really spectacular attraction, register for a night walk along the harsh medieval bastions! This tour has been deservedly recognized as the best in Ukraine 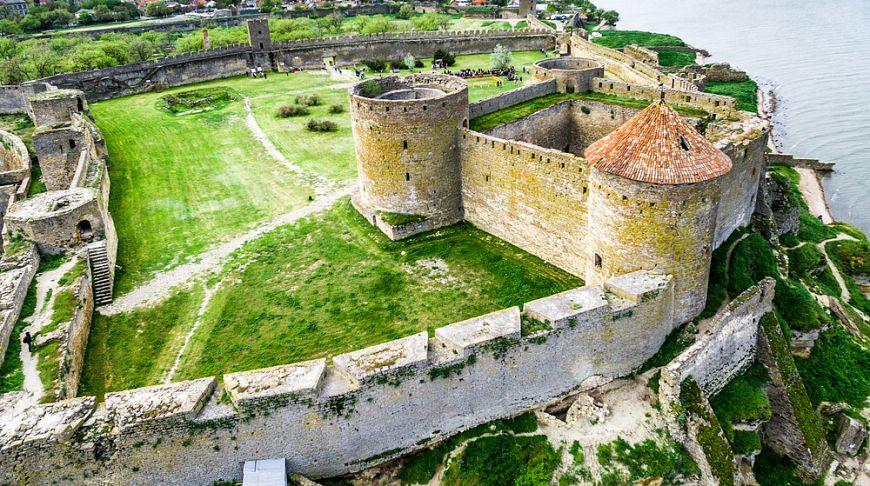 The list of the most popular fortresses in Ukraine includes the Akkerman. This fortification is located in the city of Bilhorod-Dnistrovs’kyi, the Odesa Region. It is the largest fortification of the country – its area is 9 hectares, and the length of outer walls reaches 2.5 km! Moreover, it is the largest medieval fortress in Europe. The castle is situated on the high bank of the Dniester River, so it offers a magnificent view of the area (there is a way out to the wall). Originally the fortress had 34 towers; most of them have survived to this day. According to preserved documents, it is clear that the fortifications were divided into four independent parts, but only three have survived as of today: the Civil Court, the Garrison Court, and the Citadel.

A defensive outpost here was first erected by the Golden Horde in the 13th century. A hundred years later the construction was taken over by the Genoese merchants. During its existence, the Akkerman Fortress was ruled by the Ottoman and Russian empires. In the first half of the 19th century, the building lost its defensive importance, and almost a century and a half later it was added to the category of cultural and historical monuments. Like other Ukrainian fortresses, Ackermann became a movie set in the past. Today theatrical performances and knightly tournaments are regularly held here.

Once there were about 5,000 different castles and fortresses on the territory of Ukraine. Not all of them survived sieges and fires. Only about a hundred of these majestic structures have survived to this day. And their conditions vary. But even this number is enough to arrange more than one memorable vacation!

You can choose to include one or more of the most interesting options from our top list or dedicate your trip entirely to the castles. In the second case, it is worth paying attention to the offered routes.

As you can see, a trip to the ancient castles of Ukraine is the best opportunity to touch the real history of your native country and get an amazing and positive experience. All forts, which were included in our review, offer excellent sightseeing programs and hold bright festivals and reenactments annually.